Is It Worth Visiting Pinnacles National Park ?

Did you even know Pinnacles Park existed ? And now it’s actually a National Park ?

Surprisingly not many people think or know about Pinnacles National Park when it comes to National Parks in California. Must be because of the fact that Pinnacles got the National Park status only in 2013. This relatively small park, packs a lot for families, rock climbers, hikers alike.

What is Pinnacles National Park known for?

Are you convinced to visit this park? Then read on to plan your trip.

What is the nearest airport to Pinnacles National Park?

This park is easier to reach by car.

Can you drive through Pinnacles National Park?

There are two Pinnacles National Park visitor centers. East and west and you can’t drive through the park to reach east from west or vice-versa. The roads are not connected. However, it’s a 5 mile hike to reach from one end to another for road access.

Are there bears in Pinnacles National Park?

No, Pinnacles NP is not in the bear country. But, there are variety of birds, reptiles and wildlife that make the park unique and lively.

Camping at Pinnacles national park is becoming increasingly popular among the locals and it’s hard to get reservation for long weekends and holidays. However the park does has walk-up campsites for those last-minute folks.

If you would prefer to book ahead, here is the link to Recreation.gov for campground at Pinnacles.

Yes, dogs are allowed at the campground and the paved sections of the park.

Where to stay near Pinnacles National Park ?

You have the options to stay at hotels in the following cities that are really close to the park.

(Note: There are not an affiliate links. I don’t get paid for it. I am just making your life easier to search hotels by city names.)

Near the west entrance of the national park, there is a B&B called Inn at the Pinnacles. You should be able to directly reach them at www.innatthepinnacles.com

How busy is pinnacles national park ?

On weekends, Pinnacles NP tends to get very busy. This happens because the park’s closer proximity to San Francisco, San Jose and Monterey.

Which entrance is best for pinnacles national park ?

East entrance is best for day visitors and campers alike. However, West entrance is great if you want to beat the crowd and do advanced rock climbing.

Pinnacles National Park Things to do: 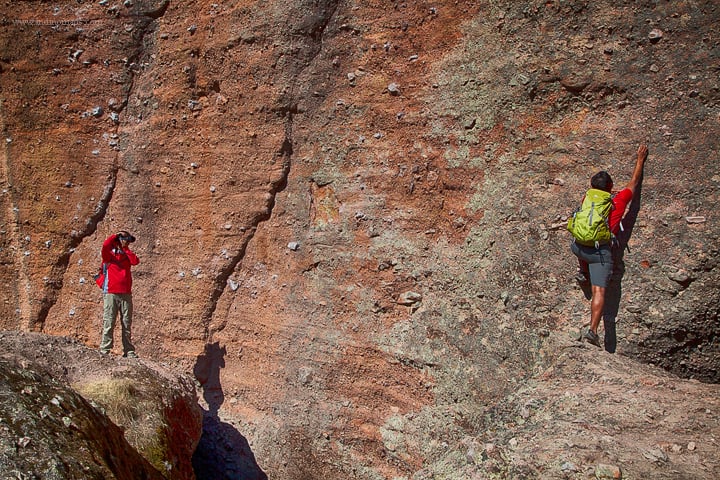 Go to the west side of the park and bring on the advanced rock climber in you. West side offers taller and more challenging rocks. There are several outfitter in the area who offer beginner lessons and multi-day adventure options.

Stick to the east side for shorter climbs as a beginner. East side rocks are sturdier than the west side. Rocks in this park are not like the typical rocks you climb at Yosemite or Joshua National Parks. Pinnacles rocks are formed by volcanic breccia and can be a little loose/fragile for a beginner climber. 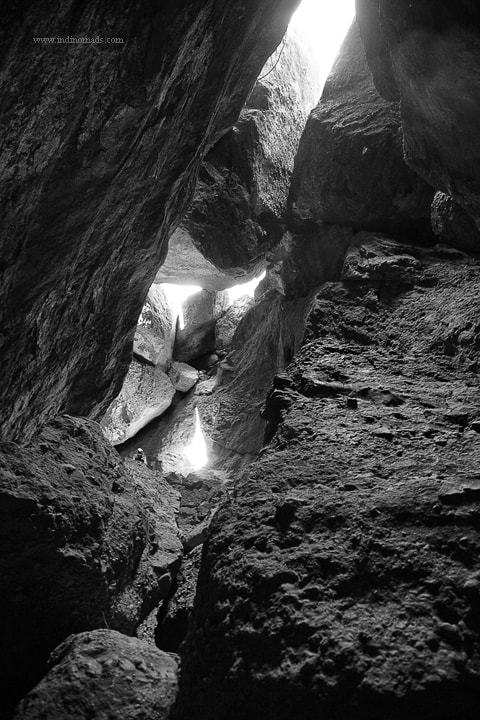 When you say caves, the first type of cave that comes to your mind is the limestone cavern. But the caves in Pinnacles are called Talus caves. What it essentially means is these are hallow spaces formed among rock, boulders and mountains.

There are several of them in the park but only a two open to visitors.

Bear Gulch Caves on the east side is easy to access from the visitor center. However, there is a brief period this cave is closed for the birds in the park to rear their young. Pinnacles NPS website publishes such closures.

Balconies Cave on the east side on the other hand is usually open year around. To enter both the caves, you would need flash lights. These are really dark even on a bright sunny day.

These caves don’t require any technical cave exploration skills. These are perfect for families with small children and elderly alike. 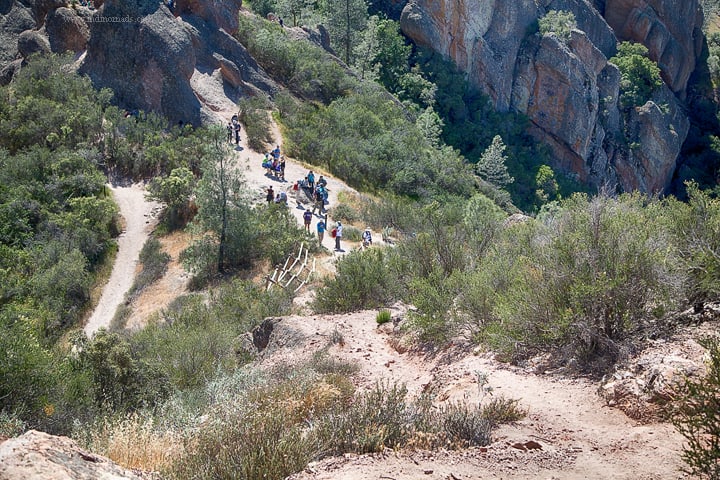 One of the most popular Pinnacle National Park hikes is trail is the “High Peak” trail via Bear Gulch, which is a 6.5 miles round-trip from the trailhead. It’s a moderate-hard trail for the following reasons:

If you want to do a shorter trail, just go to the reservoir which is only a mile away from the trail head and explore the Bear Gulch caves and return.

There is also a ranger led talk on this 1-mile section every morning. Check the NPS website for the timing as it may change during each season.

For a list of all the trails in the park, check here.

Can you swim in Bear Gulch Reservoir?

No, Bear Gulch Reservoir is not for swimming.

Where are the California condors? 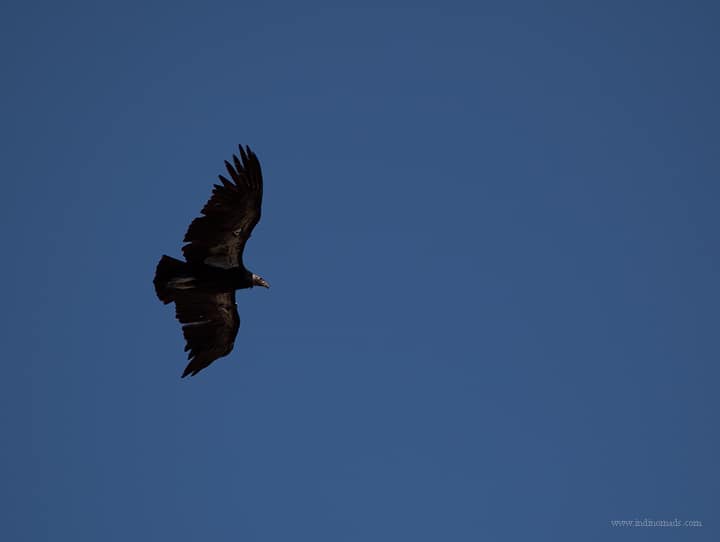 One of the most popular places to California Condors is Pinnacles National Park.

A must see if you are in the area.

Especially at a High Peak hike, it’s hard not to see them. During the hot sun there are not many of them out their flying. But, mornings and evenings, you will them hovering above you and damn..they are huge.

Nightlife at the park

How about a billion star hotel for the night ?

First order of business, check the ranger led programs for the month and book in advance for any Pinnacles National Park night hikes, full moon hikes, cave explorations or bat watching. Yes, the rangers will actually go with you on night hikes and it’s really awesome.

Given that the park is really outside Bay area’s flashing lights, on a clear sky night, Pinnacles is a great spot to get a view of the milky way. And if you are into photography, this is a must do activity.

How long to spend in pinnacles national park ?

My recommendation would be at least one-night and 2-days. However, it is entirely possible to cover the national park in one day.

Side Trips from Pinnacles National Park:

Pin this image to Pinterest for your future trip. 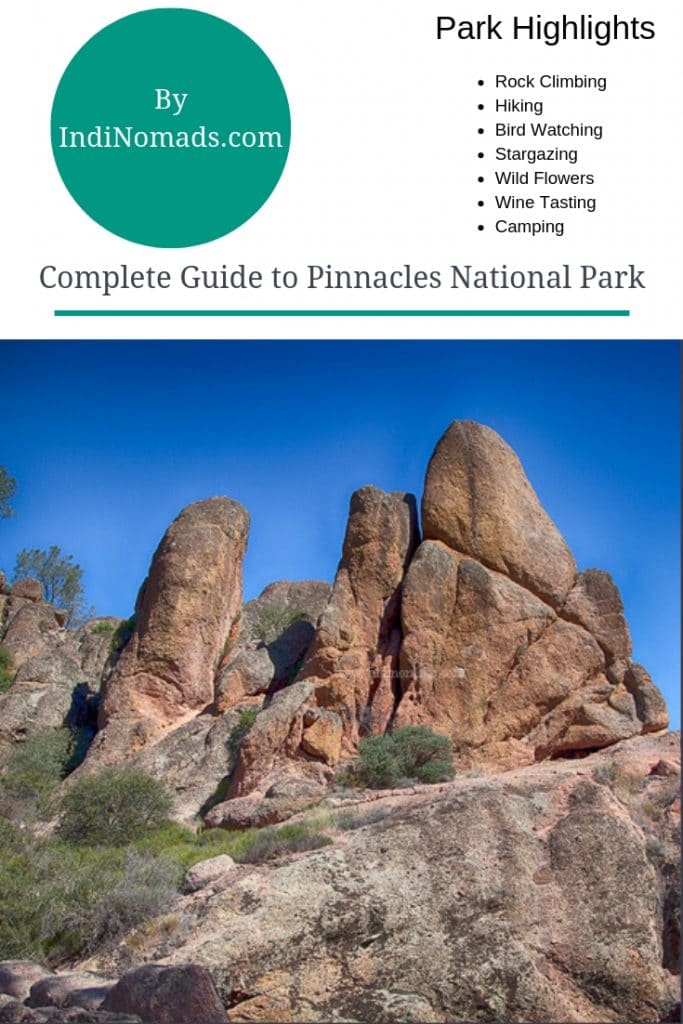 Have you been to Pinnacles National Park ? If so, what are your favorite activities?