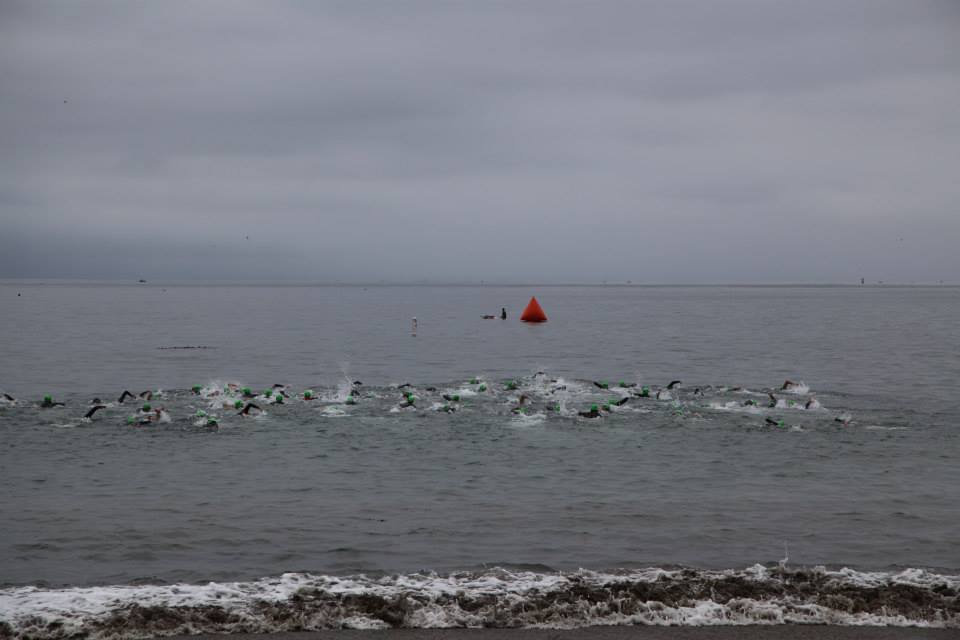 I wish triathlon races start at 10AM !!!

Dreaded the 4AM wake up, especially the fact that the previous day I was at Santa Cruz to do 56-mile bike ride and a 6-mile run and very tired, I could have used more sleep. But, once we got on the car with rest of the crew, I was all in peppy mood.

Luckily my swim wave was the last one to go into the water at 9AM. So, I got to the swim start adjusted the goggles 100-times (felt that way), took pictures of others getting into water and did a bit of warm-up swim too.

Somehow, I was still very nervous even after Team Asha Tri coach and mentors were giving me all the moral support I could ever ask for. 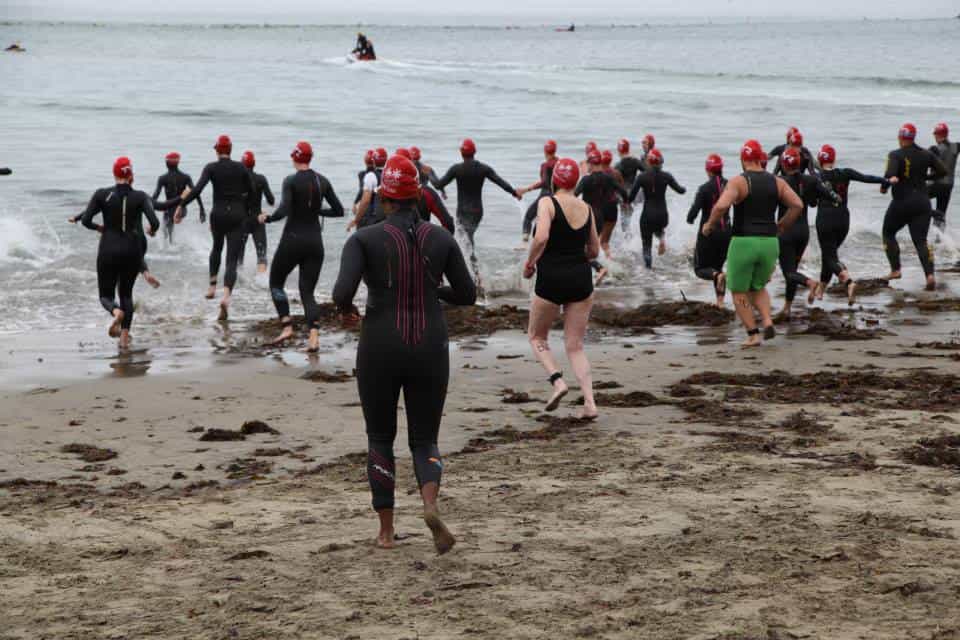 – I was the last one to get into the water on purpose. Didn’t want to compete with anyone else.

– It was two rounds of 750m swim that I had to complete. On my way to the first buoy, right side of my goggle started leaking to the extent that I had to close one eye to swim. I had no option but to stop, wave for life-guard boat, get on it, re-adjust the goggle and get back into swimming. I lost a good 5-7 mins there.

– For a moment I thought I was done with the race as I was getting more nervous with the goggle adjusting process.

– Luckily this time I was all set and completed the swim. But, I kept wondering when the goggle was going to give up.

– I think I was fine with sighting the buoy and didn’t go off-track much. Every third stroke sighting seems to help me stay on track.

– I took off the wet suit in the water itself.

– I was certainly the last one to come out of the water. Since there were not many people in the Dip-Dash race, one of the buoy was already removed before I completed the race. Not cool by race organizers….I promptly sent them an email on that. 🙂

When I got out of the swim and ran to the transition, someone with radio ran with me and sent a message to transition that I am out and had a big smile on my face. Yes, I sure had a huge smile 🙂 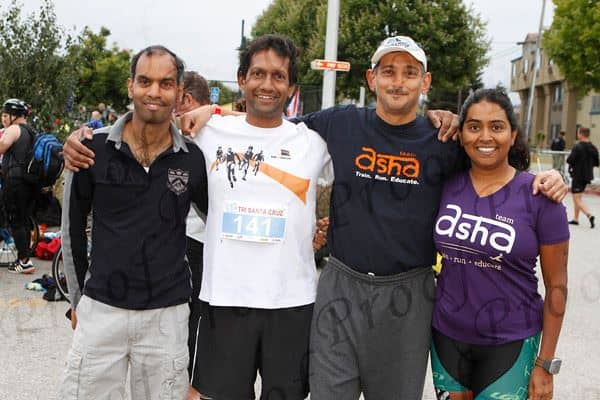 Took 9-mins to run the 0.3miles and transition out to run.

I ran barefoot from the beach to the transition and it felt just fine. The thing that certainly helped was to keep a bottle of water/towel to wash off before wearing running shoes. 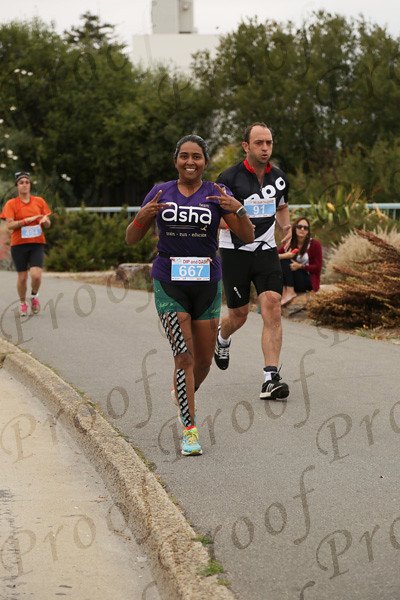 – I was hungry in the swim and couldn’t wait to eat something before running. Had two Honey Stinger gels in the beginning of the run.

– Water stop was only at 5K turn around and 10K turn around. I wished that I had taken a sip of water or taken a small bottle with me, especially after gulping two packs of gels. But, it was not that horrible.

– I had a completely pain free run. Usually I tend to enjoy a bit of shin-splints, glute pain and/or Achilles. As a precaution, I had taped myself up with rock tape. 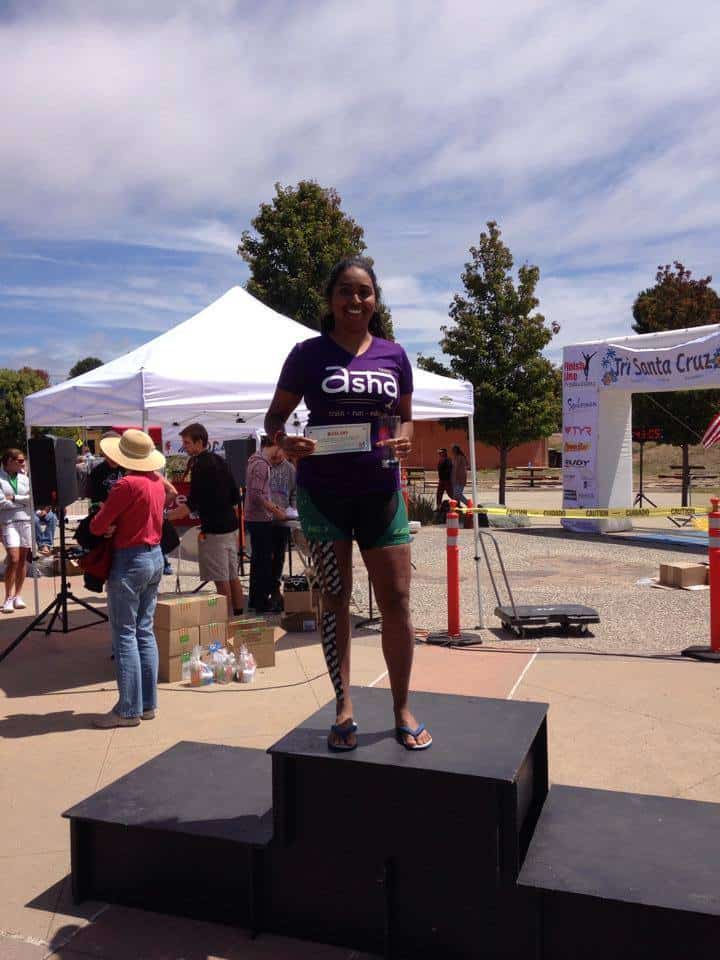 I was super excited to see Chakri, Krishna, Mouli and Coach Char waiting at the finish line.

Coach and myself put our names down for massage and waited for our turn. In the mean time award ceremony started.

I had checked the race timing on the ipads they had there. I already saw my name on the third place in my age category. But, I wasn’t sure if they were going to do podium for third place. So, I kept quiet. When the guys wanted to get lunch, I really didn’t want them to go because if they did call my name, I wanted them to be there…but this hungry bunch wanted food badly. 🙂

Wish me luck for my next races: