We had just returned from 26-days on Annapurna Circuit and Annapurna Base Camp hike. After a 6-days of gap and sight-seeing in Nepal, the trek to Everest Base Camp started with great enthusiasm.

After all, we survived one the most dangerous plane journeys in the world, the flight from Kathmandu to Lukla. If I am not mistaken, Chakri casually said, with all these high altitude walks, wonder if we can go for a marathon in the next month to see our performance. Hmmm…hope he didn’t regret that comment. Because, his words were not taken lightly. And we signed up for Bangalore midnight marathon !!!!

Root cause of signing up for mid-night marathon: Stroking self-eg0 ?!!

So, what constitutes a marathon process in general ?

Training for us was an interesting challenge. After Nepal trekking we flew to Bangalore, India for a month long yoga course at one of the two Yoga Universities in India. SVYASA is located about 35KM outside of the Bangalore city center. This is a full-scale university with Bachelors, Masters and doctorate degrees with Hospital that focuses on holistic healing along with modern medicine.

The one month yoga course we did consisted of the following elements:
•6 AM Asana class
•Strict vegetarian meal at fixed time
•No junk food availability. There is a small shop that sells biscuits and fruits but its only open sporadically
•Hostel dorm lifestyle
•8:30PM curfew for girls hostel
•Fully packed schedule with may be two hours of break spread out through the day

So, how does one manage to train for a marathon in this tight schedule and curfew ?

Answer to this puzzle was getting up at 3:30AM for running. We managed 3 weekday runs by waking at 3:30AM and skipped morning asana class for one of the weekend long runs.

Nutrition is an important part of training for any race. Fortunately at the university we ate really well. During the runs, we carried bananas and a bottle of honey to replenish.

The Bangalore mid-night marathon was scheduled on December 14th, 2013. By the time we signed up it was late October. So, the real running training was barely for a month and a half.

However, we had been active physically with trekking at high altitude and yogasana classes.

Typically, I would have trained for at least 6-months for a marathon.

Most of the times, it is a race “day”. But, with Bangalore traffic pattern, the city can’t afford to close down the roads for 6-hours. So, the race is at midnight with a cut off at 6AM.

This was my very first mid-night run and I had no idea how to get ready for it. But, I think the 3:30AM training runs definitely came in handy.

At a slow pace, we started the intended 10-loops of 4.2 KMs. I must admit the race course, after a couple of loops, got pretty boring.

– Challenges faced on the race night:
•Lack of sleep. We tried sleeping during the day, but didn’t really happen.
•Fatigue, I am especially used to sleeping early. Waiting till mid-night even on a regular day is not my thing. Especially if I have to run a marathon,go figure !!!
•Forcing myself to eat at regular intervals. Thankfully the race organizers knew my types and had kept small candies at one of the booths. I generously served myself with a handful of them.
•I made a comment to Chakri that if I ever sign up for anything that requires staying up at midnight, “smack me in the head”. He promptly said, I told you !!!!

– Highlights of the night:
•I ran next to elite runners. Yes, I am talking about Chakri and Krishna here. Even though, these two could have run for better time, they ran slower. Chakri stuck around with me until I said enough is enough !!!
•Besides them, the ones going for the prize money ran by us causing a drift as they passed. This is the first time I have seen these 2:30-hrs timers run next to me.
•Song of the night as one spiritual runner played loudly – Vishnu Sahasranamam !!!

When the race started, there were about a 1000 runners who were giving us company. After about a half-marathon point, the number of runners started reducing drastically. There were some drop outs for all the challenges mentioned above. But, above all the total number of full marathon runners were small comparatively.

The race was well organized from nutrition and support perspective. There was water, banana and health drinks available the entire night.

What’s really impressive was there were few people who stayed up all night and cheered at every corner and for every runner.

The finish line for me was 4.2 KMs away. It was 5:55AM when we completed 9 rounds of this 4.2km loop. I chose to stop. Because the race co-ordinators said they are closing the race. I was reasonably mad at them as the race actually didn’t start at mid night. They were late by 18-mins. But they seemed to have stuck to the 6AM close time. This sounded a bit unfair. But, later we realized that they didn’t actually stop timing at 6AM. We could have run the last loop too.

But, the body was beaten up by then. What’s the point in running when it is no more fun !! I know, if I really stuck to those words, I should have stopped by half-a-marathon. Oh well, the idea of getting the medal was driving me crazy there !!!

My sincere thanks to those of you who contributed to the fundraising I conducted on behalf of ASHA for Education. What is assured is that the money you donated reaches the kids who need it the most. 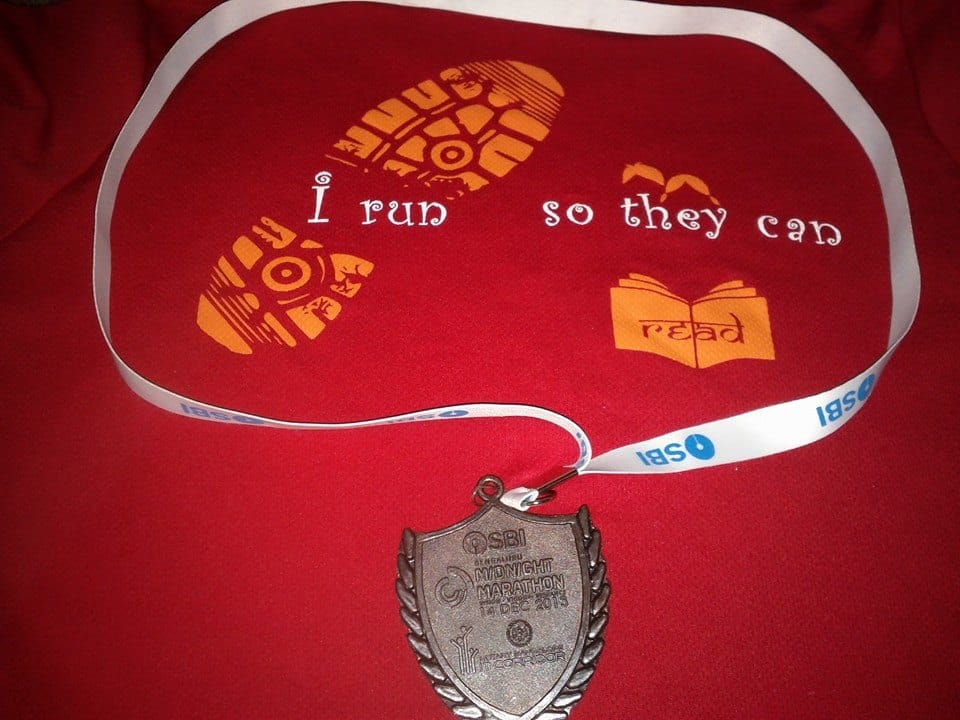