Annapurna Circuit and Annapurna Base Camp : A place I had dreamed about almost 5-years ago. A truly unique experience that filled me with a sense of accomplishment with true test to my ability and limit. I only returned with more passion and love for life on this heavenly place called earth !!!

1) Treacherous roads are a 21st century luxury: The starting point for the Annapurna circuit trek is a small village called Besisahar. Before the roads were built, one had to walk to this village from Pokhara. But, with the 21st century economic development, there is a “road”. Jeeps are the main mode of transportation to this village. When you sit inside these fully crammed-in jeeps, it is easy to forget that you are actually on a cliff. What is more exciting is when there is a jeep on the opposite direction, sometimes you get at arms length to a waterfall or a stomach clutching cliff-drop edge. Either way, it is mostly safe !!! 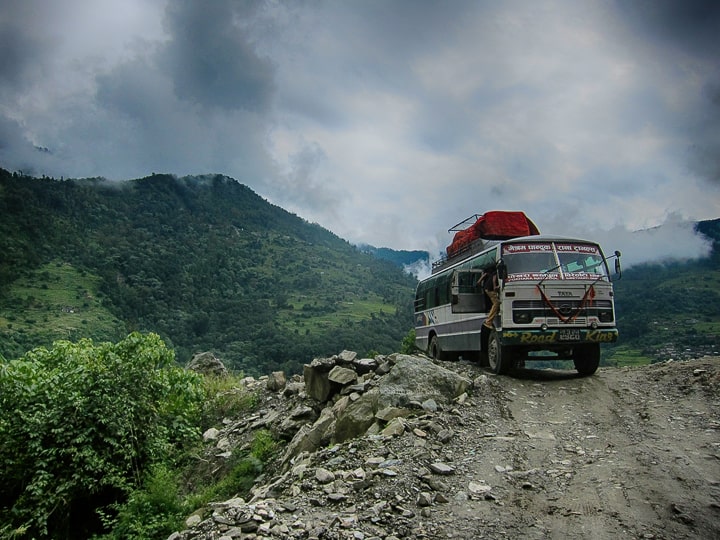 2) Life is a piece of cake for lot of us: This Nepalese man in the picture below is carrying a fridge on his back for his boss. Yes, you guessed it right, it weighs a ton. It’s a way of life for the mountain men and women. They have to carry everything from an egg to a fridge, up and down these trails to serve to the tourists.

A trekker (Chakri) stops to give this porter a hand to lift the weight back on his shoulder after a brief rest. The porter scene on the trail can bring blood tears to a sensitive person. It’s just plain brutal. I barely carried myself on this trail for 26-days. How does it feel like it to carry 60-100kg on one’s back with a flip-flop for footware?! My personal porter Krishna calmly says, “Sherpas and porters will carry anything to feed their families”. 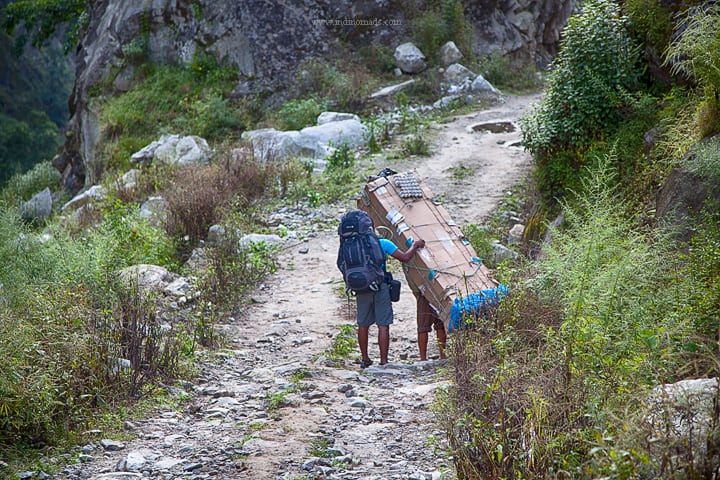 3) Rocks, chants, and prayer wheels: “Om mani padme hum” – Hail to Man’s Overself!,” where there is no death.

There are hundreds of flat rocks with these chants etched, lead the way up to the mountain ranges. Bhuddism is a part of the Nepalese Himalayan landscape. The prayer wheels, the chanting etched rocks, and prayer flags, adorn the mountain villages and trails reminding everyone the spiritual aspect of Himalayas. 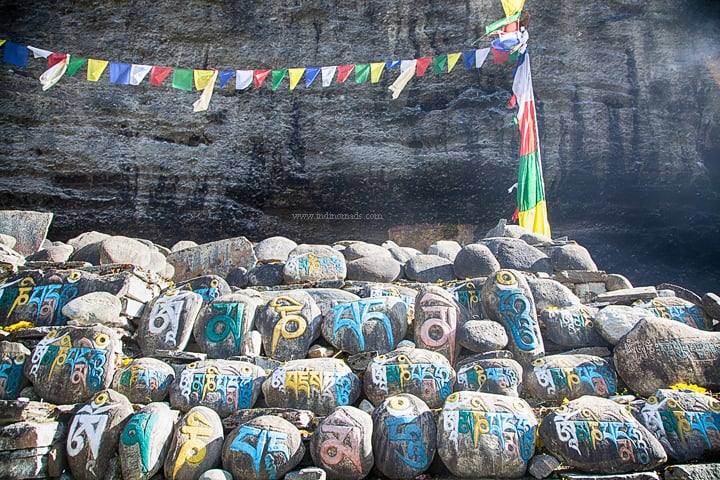 4) Children that are eager to practice English with trekkers: These mountain kids pick up English by speaking with the tourists. And they are eager to practice and improve their language and social skills with every trekker passing by. It is one of their favorite pass time on a high season.

Their English is little, but they are curious about where you are from, and what you think of their villages and mountains. It is a rewarding break to stop for these children’s curiosity. 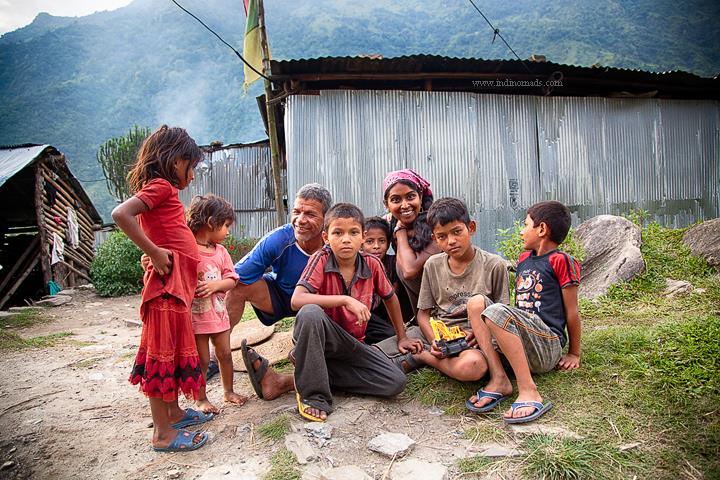 5) The tea house culture: You hike for hours on these high altitude trails, taking in the beauty of the mountains around. You are worn out and have no strength to pitch a tent. No Problem !!! Almost at every 3-5 km there is a village with “tea-houses.” Basically, the villagers rent out their rooms and feed you as much as you want. At higher altitudes, they provide fireplace for the trekkers to warm up. The menu at these tea houses have everything from Dhaal Rice to Pizza. And they sell all your basic needs: Toiletries, yak-wool clothing, snacks and chocolates. Keep in mind that these goods were carried up the mountain by porters and they are not cheap. A snicker bar can cost a $2. 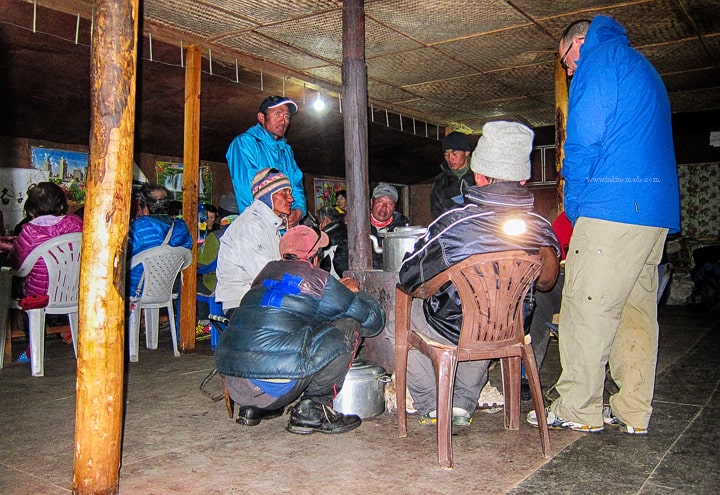 Thorang La pass is the highest pass in the world at 5,416m altitude. Crossing this pass at counter-clockwise direction is comparatively easy. Yet extremely hard. However, some brave souls attempt it from the opposite side starting from Mukthinath. I saw only one British hiker on the day I made the pass. 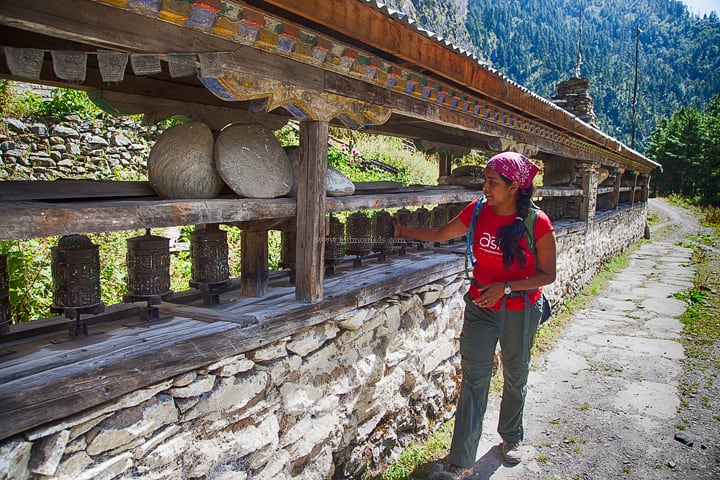 7) A buddhist ceremony : I was blessed with good timing for some of the best views and experiences on this trek. I strongly believe that when I am in tune with myself and ask for something, it truly manifests. The day before at Upper Pissang, I wished that I could attend a Buddhist Ceremony or a prayer meeting. I was pleasantly surprised when we accidentally attended this Buddhist ceremony at Manang. The lama, who usually stays at a monastery up the hill at 100-lama temple, was at Manang that day and there was a huge chanting/prayer gathering happening.

Nepalese people welcomed us and gave us space to sit down among them for prayers. Pleased with the experience, yet again I realized that thoughts can manifest when one is in tune with the world.

8) Cow — Yak Relationships: When Cow and Yak happen to mate with each other, a “mountain cow” is born. You got to love the creativity of this hybrid system to get the best outcome. 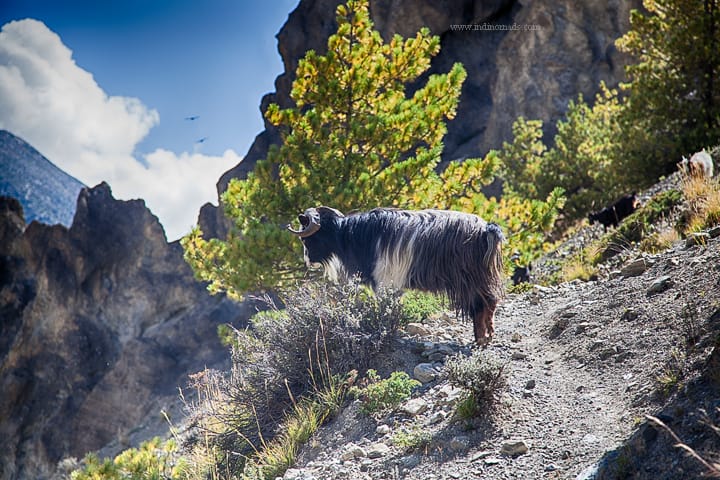 9) The Mountain theatre show: It was a cloudy and rainy day at Annapurna Base Camp. That generally means the mountain peaks are covered with clouds at 4200 m at ABC. We decided to stay put an extra day to see if the weather will change mind. Next day morning at 5:30AM, the clouds cleared up, revealing the beauty of the valley surrounded by magnificent snow peaks. As if it was a theatrical show, the clouds came in closing like a curtain, at 6:30 AM covering the peaks. Basically, we got one full hour of show. What a drama !! 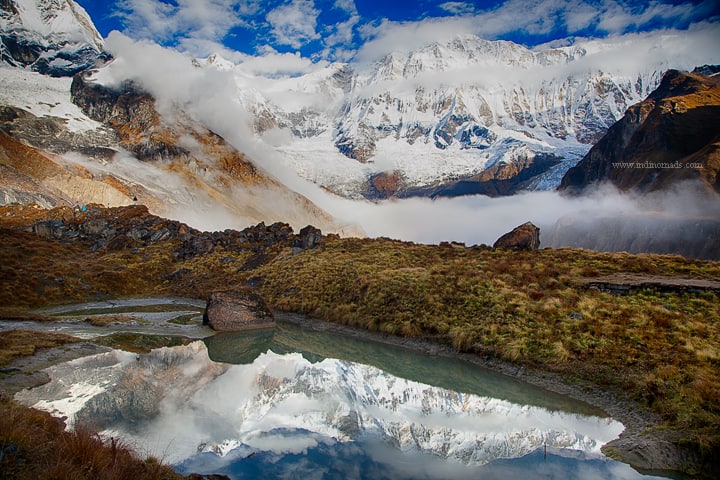 10)  4:30AM hike to watch sunrise is well worth losing sleep over: Poonhill near Ghorepani is a must do hike for a spectaculr panoramic view of the mountains and sunrise. In September/October time frame ,when we went, there is no way to guarantee a clear sky. So, one has to take a chance, wake up at 3:30AM, and get to the top before 6AM for sunrise. Yet again, we got lucky and got a great show of the sunrise. It was well worth losing sleep over. 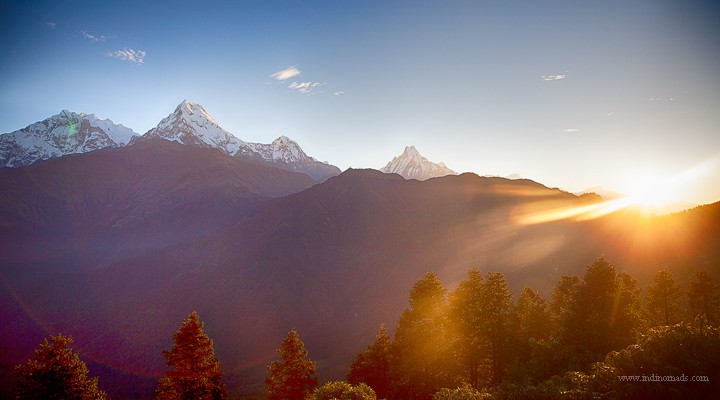